Russell 2000 overvaluation is already a familiar topic for some investors. This index is one of the main American stock exchange indexes, composed of 2000 small caps that have the distinguishing feature of having trailing 12 months P/E ratio of 130.5x and 120.3x after cyclical adjustments. It seems to be a very good opportunity to be short, or at least to keep in mind in the case market tendency changes.  Our trading algorithm has given already a signal to take a short position in Russell 2000. We will now try to begin the analysis of the fundamentals of the Russell 2000 overvaluation in this article, and in the following ones.

As was the case on other occasions, the method that we will use is discount of dividends, using the following equation:

Where the dividend is expressed by  and we consider every kind of shareholder remuneration including share buybacks as dividends.

The dividend’s calculation is performed in three steps:

Nine years after the market bottom in March 2009, we are pretty sure that the economic stage could be somewhere between the last third and last quarter of the cycle. Certain information makes us think this, such as the employment rate in the USA dropping near to the lowest that it has been for fifty years, the output Gap already being in positive levels, the inflation evolutions that have moved from below zero at the beginning of 2016 to 2.1% currently, and the interest rates of 1.75% in the USA after six upward movements, five of them in little more than one year.

The economic evolutions in the near future in the USA will definitely depend on the Fed’s ability to establish the correct interest rate levels. The monetary authorities have to avoid  two abysms: first, the rise in inflation and creation (or increasing) of speculative bubbles, and secondly an excess of conservatism that could cause the economy to slow down, and therefore cause the beginning of a recession. Almost everyone knows how difficult this task is and the long time that the economy takes to react to the stimulus, making it even harder and riskier. To a certain degree, it is a game of trial and error. Sometimes the error can be corrected and sometimes it cannot.  In this sense, the FED can be compared to a funambulist – he can do it better or worse, but no one should expect him to walk the tightrope indefinitely.  He has already walked in the abysm for 9 years, which is a significant duration, considering that economic cycles are on average 9.2 years long.

For all of these reasons, we have decided to only discount the dividends for 2018, not only for Russell 2000, but for all the indexes that are under the valuation scope of our trading algorithm.  But as we will see after, Russell 2000 overvaluation would be also the conclusion considering a longer term for estimations.

The USA’s GDP evolution can be approximated to an exponential growth with the following equation:  e^(-63+0.0361*Year). This estimation is quite precise, particularly in the medium term, which is implicit in the R² ratio of 0.98x (Chart 1). 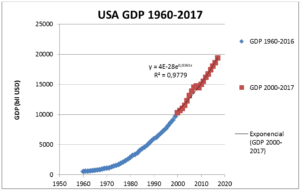 The correlation between Russell’s EPS and the USA’s GDP is also good if the recessional years are excluded. The reason for this elimination is that during the low periods, a significant number of companies incurred extraordinary losses and impairments that are not only a consequence of the state of the economy of the current year, but also the failure of longer term investments. During these periods, the correlation of the two magnitudes breaks down, and it reverts to high levels when the economy returns to a long term growth tendency. But as Chart 2 shows, the main difference between including recessional years or excluding them is not in the base estimation of the diverse models, which are very similar. The variation is more in the standard deviation, and therefore the precision of the predictions.

As Chart 3 shows, the difference is more in the R² ratio than in the central estimation of the regression models.

We have adopted Option B but as we can see, the difference between the other options is negligent.

Although we will analyze in further publications the rest of TPrice formula factors (Pay Out, g and Ke) the Russell 2000 overvaluation seems to be clear according to a PE of 49x considerirng option B based in Bloomberg´s time series trailing twelve month earnings.